Snippets of Useful Information and Tools

Here’s a collection of useful snippets that I’ve picked up or written over the years. Most are small, but in the grand picture, contribute greatly to my productivity.

I’m a command-line junkie, so naturally, I spend quite a bit of time there. One of the best tricks I’ve learned over the years, is to edit your .inputrc file to support searching through history easier. Yeah, yeah, you can hit a couple magical strokes and do it, but that’s not what I’m talking about. I’m talking about typing the first few letters of your command, and then hitting up and down to scroll through every command that starts with those letters. Add the following to your .inputrc:

This tip has to be one of my biggest time savers. I feel like I’m stumbling without this feature.

Changing to the top-level folder of my project

I work on lots of stuff, and I constantly find myself needing to crawl back from the depths of a project to the root of the project. I structure my projects so that the top-folder always resides in my home’s project folder. So, my directory structure may look like this:

When I’m way down in a tree, I type cdt, and that flings me back to the top of the project. It’s a handy little shell function for bash:

I’m an avid user of Subversion, as are many of the customers that I interact with. One of the most useful–and annoying–things about Subversion is that when you commit, it only bring portions of the tree up-to-date. I like having my working copy all at the same revision, so that make it easier for myself, I have handy alias:

It works similar to cdt, except it takes to resultant directory and runs “svn up” on it. I should probably make my svn ci just bring the entire tree up-to-date after committing, but there’s enough times when I don’t want that to happen that I haven’t bothered to write said script.

Make sure to include this in your .bashrc:

Grep will pick it up and refrain from searching down the .svn working copy admin area.

Log messages are a big deal when committing your changes. It communicates the intent of the developer, warns others of what has changed, and provides enough context for someone to get started reviewing your code offline. My script doesn’t solve any of those problems, but it does help to format the list of files that have been modified, so that you can get started writing the meat of the message. I find an occasional bug in it, but it’s very useful on the whole. Here’s the script I use:

I found this out while rooting around trying to determine how to get PyQt4 working on my laptop. The short form is that the Qt libraries weren’t (at the time) built with 64-bit support, but Snow Leopard wanted to run my apps in 64-bit mode. In the end, it took one small change to how my app was launched. You have to do it through the arch tool. For instance, to fire up python2.6 in 32-bit mode, run:

Interacting with Keychains from the command line

You can use the security command to manipulate keychains, and to set and retrieve passwords from the command line. Here are a couple of links pointing to how to use it:

Breaking out of a stuck SSH session

Turns out SSH has an escape sequence, just like telnet’s ctrl-]. In ssh, it’s simply ~, but only after a newline. Here’s the output from ~?:

So if your session gets stuck, hit Enter, and type ~.. Then you’ll have control of your terminal again.

Finding which package has a file in Ubuntu

There’s a nify tool called apt-file which can be used to find which package provides a file. To install it, simply do:

You’ll need to fetch the file data from the apt repositories. Do that by running:

I ran across this recently where I was cloning a repository and I would see the following:

There is a fair amount of information out there in Google-land. Most recommend making sure you have a language pack installed, and locales are up-to-date. That translates into the following for me:

View diff between commits in GitHub

GitHub currently doesn’t make it easy to get to, but you can view the diff between a set of commits… not just between branches. If you go to your project and add /compare to the end, it’ll pop up a little form to help you fill out the start and stop revisions: 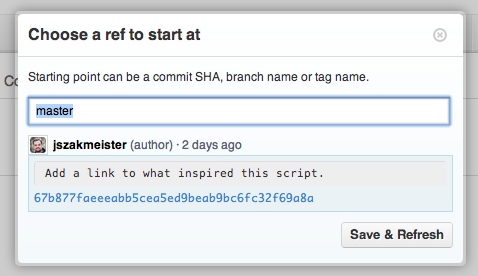 You can also tack it into the url itself, like this:

Here’s the link if you want to view it yourself.

I don’t install much stuff on my machine, but every once in a while I do, and then want to remove it. This has always been a bit of a pain, but I found the way to do it: pkgutil.

pkgutil comes with the operating system, and has a number of options. Here’s the grand summary.

If you remove a package, you need to make sure to forget it too.

Apple has done a decent job documenting the available options. One of the most interesting is using Jar Bundler to bundle the application into a Mac app. The first link also outlines how to go about it from the command line too.

Java has bugs too

parking to wait for …

If you have a contentious lock, you might run into a variant of this bug. The parking mechanism seems to be busted, and shows itself most on >4-way machines. The use of “-XX:+UseMembar” is a workaround, though it doesn’t actually fix the underlying problem. It was supposedly fixed in 6u19, but there are reports of people seeing it in 6u21. While someone responded claiming it wasn’t the same problem as 6822370, looking at the stack traces it appears that they are related to me.

Setting up a real cert for QuickBuild

It turns out it’s extraordinarily painful to set up a proper certificate in a Java keystore, so I’m going to share the magical incantation that made it work with QB.

First, you need to get a cert into the right format. In our case, that meant we needed to bundle the key, the public cert, and the provider’s intermediate cert.

To do this, use openssl:

Make sure to type in a password when prompted, otherwise keytool will die with a divide by zero error when you go to import it into a Java keystore.

To get the new cert into a keystore, run:

Here, $ALIAS is the name to assign to the cert. For QuickBuild, it needs to be called QuickBuild. $PASSWORD is the same password assigned to the export, but only the destkeypass really requires that. You could assign a different deststorepass, if you like. Note: the srcalias is actually a 1. There is no alias in a pfx file, so it just uses an index number. We put only one combined certificate in there, so the alias for it becomes 1. Also, it’s not necessary to put the passwords on the command line. keytool will prompt you for them if you leave them off. It is necessary that you at least provide one.

Check your work with:

You should see the cert listed as a PrivateKeyEntry. If it’s listed as a trustedCertEntry, then you’ve failed to include the private key.

With QuickBuild, you need to run the config.sh script. It requires X11 to run, so I had to use sudo sux <quickbuild-username> to make that work.

Restart QuickBuild and watch it go!

Minimal requirements for gVim on Ubuntu

Installing the following will get you the bare minimum needed to run gvim on a remote box without a full-up Xserver install:

Exiting a branch in bash

Occasionally, I run into a situation where I want to test a condition and possibly exit with a nice message on failure. If you use a subprocess like this:

You’ll find the script doesn’t actually die with an error. Instead, use curly braces:

Then it will work as expected.

You need to be careful about what you’re doing here, as the quality of entropy may not be very good and compromise your systems security. If you do decide you need something to help keep /dev/random’s entropy pool full, consider haveged. It’s available in Ubuntu with sudo aptitude install haveged.

1Password is a great application, but it does suffer from one drawback: no font selection to use when printing. By default it uses Helvetica which is a really poor font to use for printing passwords since it’s hard to distinguish a lowercase “ell” and an uppercase “eye”. It’s also difficult tell the difference between a capital “oh” and a zero.

To fix this, edit the CSS style sheet used when printing, which is located at 1Password.app/Contents/Printing/default.css for 1Password version 3.x. Change the body style to use a better font, such as “DejaVu Sans Mono”, which does not suffer from these issues.